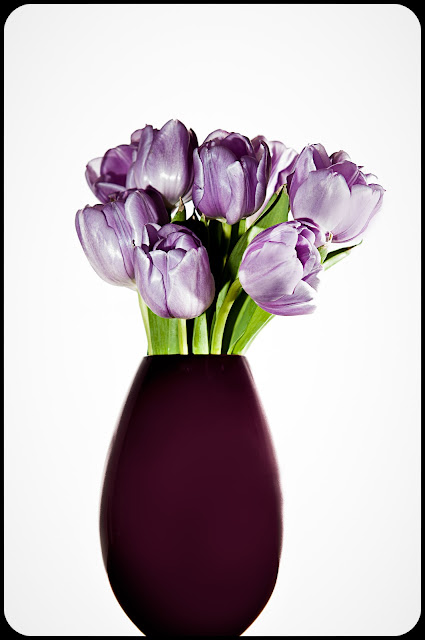 Today I was tired after 2 hours of spinning, so creativity and energy was low. But my wife had just bought a lovely bouquet of tulips, so why not target them as a subject for the "photo of the day".

Above is my final image after I added lots of flash light and did some heavy post processing in both LR4 and CS5.

Here is the starting image where both a SB-700 and a SB-900 is shooting at their lowest flash output (controlled through PW's - PocketWizard Flex TT5 x 2, PW Mini TT1, PW AC3). 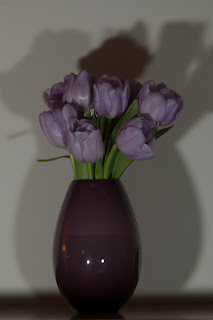 From here I started to positioning the two Speedlights and increased their flash output until the wall behind the flowers was completely white (done with a SB-700 lashing the wall from the right side and with a SB-900 front left lighting both the tulips and the wall on the left). I used a white reflector to reflect light from the wall to the bottom half of the vase. A Nikon MC-36 remote cable release unit was used to trigger the camera (Nikon D300 with Sigma 70-200mm f/2.8). 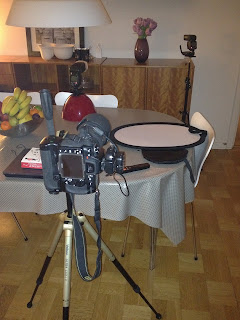 10/11/2014
Can you guess who the nice young man is in the image? It is me as a high school student - important years - where my passion for photography really took off. My god - 35 years has passed since those happy years.

I have just scanned b/w negatives and color slides from these years, and it has been hilarious to see the pictures again. Since many of the images are not something to boast about, the mission was only to get the old negatives and slides converted to digital format. Since I have many pictures from my analog years this conversion process must also go quickly.

Therefore I have just tested JOBO Snapscan 9000. It took med just 5 minutes to unpack it and set up. The scanning process is extremely simple. You install an SD card in the scanner, and then feed negatives or slides into the scanner by the help of various rails and frames - one at a time. The scan process only takes 4 seconds per negative / slide. The scanner has some simple correction options such as built-in color corre…
Tilføj en kommentar
Læs mere